Posted on November 14, 2013 by mommydaybyday

It’s been ages since my husband and I have been to a wedding. We have been married for for a lifetime and so have my friends.  So I was thrilled a few weeks ago when the invitation found  its way into my mailbox.

Wow it’s been a long 16 years… I think that just means I am old! I had no idea what was going on at weddings these days and I made note of all the new trends. I am thankful this bride and groom giving me the opportunity to crawl out from under this rock and see what’s happening in the world.

Here are the top 7 new trends…

1.) Cocktail Hour has enough food to feed an army. This cocktail hour had more food than my own wedding. When I planned my wedding I was delighted with pigs in a blanket at cocktail hour. Now the cocktail hour has carving stations, pasta stations, a crudite station and more. Okay so food stations not so trendy but one was a mashed potato bar! Seriously I died and went to carb loaded heaven. What’s better than mashed potatoes. And if you weren’t yet in a food induced coma there was also a taco bar.

Honestly I could have gone home after cocktail hour and taken a nap I was so full.

If you were able to rally after all that food and hit the dance floor the bride and groom supplied flip flops for sore tootsies. Any guest who wished to ditch their heels for some flip flops were welcome to do so. I, of course, being raised by my  mother, did not take off my shoes. We never took our shoes off anywhere. However, I did take a pair of flip flops for use at a later date. Can’t pass up on a freebie.

3.) A Costume Change. The bride, who was very beautiful and wore a stunning gown actually changed her dress half way through the reception. I was floored! The new gown was equally as stunning but I just can’t wrap my head around changing gowns. I was so in love with my wedding gown I can’t imagine having to take it off during the reception and change. I mean who I am Lady Gaga? My wedding night we stayed at the Plaza hotel and I remember just walking in and out of the lobby because I wouldn’t take off my dress. BJ eventually had to put his foot down, “Alright, Jen that’s enough.”

4.) Photo Booth. Very popular at Bar Mitzvahs and sweet sixteens but I had no idea this trend had spread to weddings. If you wanted to take a break from the food and dancing you could take pictures of yourself in the photo booth. Of course what fun is a photo booth without props! My husband reluctantly took these pictures with me- he is a good sport. They have been a huge source of entertainment for my youngest daughter who just can’t stop laughing she thinks they are so ridiculous. 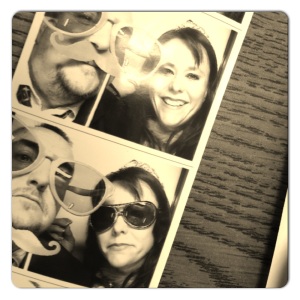 5.) Slide Shows. There were two big screen televisions hung in each corner of the room. After a time they began showing pictures from the wedding we were currently at. If you happen to be in a picture you better hope you looked good because then it played again and again for the remainder of the wedding. In addition to the party slide show, there was a well produced slide show of the bride and groom from infancy to the present day that was both sweet and sentimental. 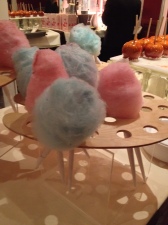 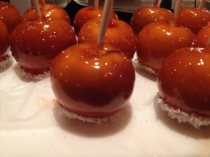 As the guests were leaving they could grab some goodies for the ride home. Here we were dressed to the nines waiting around for cotton candy and candy apples as we waited for the valet to bring our cars around. I imagine it was quite a sight to see.

7.) After Party. If you were still ready to party you had an option other than hitting the nearest bar. In a third ballroom was an after party. I unfortunately was driven to the party and my ride and husband both vetoed my desire to stay for the after party. But really who am I kidding I was asleep before my head hit the pillow. I did manage to sneak a peek between the cotton candy and our car showing up. There was music and guess what? More food. From the doorway I saw a buffet table with sliders and wings. What a great idea!

Can’t imagine what the trends will be when my 13 year old is ready to get married.