I am having a breakdown!!

Posted on February 10, 2012 by mommydaybyday 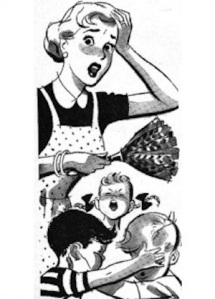 I do the best I can to keep it together. I make lists and reminder notes. I lay out clothes and pack bags the night before. I try to implement all of the tricks of the trade we working moms have developed to help us keep it together. For the most part it usually works. Nevertheless, there are those times when there is a malfunction and the whole system crashes.

Once the meltdown commences there is not much hope for recovery.

It all started innocently enough, my daughter needed to make an edible atom for a science extra credit project. Okay no big deal, I can handle it. She asked if we could make a cake and decorate it to look like an atom. Great, I had thought. I am a cake and frosting guru. This was going to be no big deal. I have created three tiered castles and numerous character cakes…an atom cake would literally be a piece of cake!

Here are a few of my masterpieces!

Taking it day by day, like I always do, I wasn’t concerned at all about this easy, no big deal project until the night before.

A quick stop at the store to pickup cake mix and I was ready to roll. Caroline and I found a small round cake pan and got right to baking. While the cake was in the oven she began finishing her homework and I set out to make the icing.

What? Not enough confectionary sugar to make icing? How could that be I was just at the store, why didn’t I get it then?  So now I am aggravated and kicking myself for not checking to make sure I had everything before I went to the store.

And here is where I made my fatal flaw. Since I was so annoyed at myself for not having enough sugar I chose to make due with the sugar I had rather than waste time and go back to the store. Big Mistake!

Needless to say things began to deteriorate quickly. Fast forward an hour and I am trying to decorate the cake with this terrible icing. It was too thin and sticky and it wouldn’t spread smoothly on the cake. Now the cake is crumbling and you can see the cake crumbles in the icing, which I detest more than anything. I am starting to come apart at the seams. I can tell because Caroline is beginning to look at me like I am a three headed monster. That is a good sign that the meltdown has begun.

It is getting late now and I am completely exasperated and it’s all my fault! I can’t make this cake work and instead of retreating I keep chugging ahead and making it look worse. The cake is a train wreck. I try to decorate the top using the diagram Caroline made. The icing isn’t piping well because of the consistency and it looks horrendous. I can actually feel myself starting to unravel. In my frenzied state I send Caroline to bed and finish on my own. It is now 10:55 I am in the throes of a full and complete breakdown. I take the entire cake and throw it in the garbage cake platter and all.

It was like an out-of-body experience. I couldn’t believe what I had done. I had acted like a complete and utter lunatic. To make matters worse now the supermarket was closed so I couldn’t even get any of the supplies I was going to now need to make another cake. The kitchen was a mess and I was a mess both inside and out. It was so late and I all I really wanted now was to go to bed. I wasn’t  going to get anything done now, I was long past sanity at this point. So ignoring the messy kitchen I proceeded to get to bed. At least I could get some sleep and salvage this horrific night.

But first…  I let the dog out. Another fatal error.

Our puppy has developed an annoyting habit of not coming in when I call him. He runs around and around and will not come in. When I go outside to bring him in he runs circles around me. I don’t know if you have ever had the pleasure of chasing a dog around, its fabulous and makes you feel like a big idiot. I am yelling at the dog and threatening him. Telling him I am going to leave him out all night- like he really knows what I am saying and even if he did I don’t think he cares. I must have sounded like a raving lunatic.

With my meltdown complete I enter the self-pity stage and the waterworks start. I started to cry hysterically. I was at my wits end chasing a dog around, covered in butter and sugar with dirt patches on my knees from where I had crawled on the dirt in an attempt to catch the dog. I retreated into the house broken down and busted. I headed upstairs and woke my husband who had no idea what was going on. I told him he needed to go and get the dog from the backyard and proceeded to crawl my sorry self into bed. Seeing that I had completely malfunctioned, my husband went and got the dog without saying a word. I had reached my limit and had been destroyed by a cake and a dog and  I cried myself to sleep.

At five thirty I am up and in the car on the way to the store so I can be there when it opens. I am in my slippers and pajamas, but I really don’t care. I get what I need and quickly race home to put the cake in the oven. While it’s baking I make the icing, clean up from last night, get ready for work, and make the lunches. I am not functioning at full capacity by any means but I have recovered from last night’s meltdown. I had downgraded from stark raving lunatic to mildly crazy. However, I almost lost it again when I tried to ice the cake too soon without letting it cool and the icing started to melt. I took a step back and took a few deep breaths and got dressed for work. When I came down the stairs I had 10 minutes left before I had to leave for work. I decorated that cake at breakneck speed. Caroline had her extra credit and I was on my way to work.

So what lesson have I learned from this meltdown. Cake even if it isn’t pretty enough to turn in as an extra credit project is still cake, as my husband politely pointed out  the next day. We still could have eaten eat. The thought never crossed my mind in my lunatic state. Had he been up, he said he might have pulled a Costanza and eaten it out of the garbage. He really loves my cakes.

Of course most importantly I learned in the future to take the 15 minutes to go to the store and pick up the icing. I wasted the whole night because I was too stubborn to go back to the store.

And lastly, don’t let the dog out after my husband has gone to bed.

In case you ever need an edible atom…. 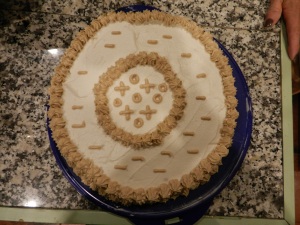 20 Responses to I am having a breakdown!!