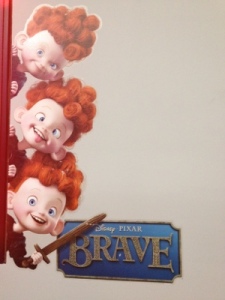 Disney and Pixar have teamed up again this time bringing us a 3-D Scottish tale about a fiery red-headed princess named Merida.

My five-year old Amelia and I have just returned from the advanced screening. Amelia was bubbling with excitement as we waited on line to gain access into the theatre.

Since Amelia is an avid television watcher and Disney is her channel of choice, she was fully prepared to see the movie. There has been a tremendous amount of build up and cross promotion by Disney and she knew all about the movie already. I was pretty excited too because I had seen the trailer and had high expectations for the film. I was eager to see a strong heroine protagonist in a children’s film.

The overall experience was pretty pleasing. The movie is visually stunning and the Scottish landscape is breathtaking even though it is animated it is incredibly life-like. In addition the cast is fabulous and they do a great job with the characters. The audience really enjoyed themselves and laughed in all the right places. I surveyed several people of all ages as they left the theatre and all those I asked said they really enjoyed the film.

The film opens with a pretty scary bear attack. Amelia was upset and started to complain that the movie was scary. Since she has seen a shark bite off Bethany Hamilton’s arm in Soul Surfer about 1,000 times I figured she could take an animated bear attack. However, there are a few bear attacks during the movie and her overall review was the movie was pretty scary.

The best part of the film is the heroine, Merida. I love her! She is an independent,  freethinking princess who I think will be a good role model for young girls. She is an expert archer, a little reminiscent of Katniss from the Hunger Games. So now all the girls too young to see Hunger Games will also be asking parents if they too can learn how to shoot a bow and arrow. I am sure that archery lessons are seeing an all time high.

The plot itself starts off really strong but unfortunately falls a little short by the end of the movie. At the heart of the plot is the relationship between Merida and her mother, Elinor.  Merida is a typical teenager and feels like her mother is always telling her what to do and bossing her around, as only a mother can do. Her mother, the Queen, just wants Merida to act like a princess and a proper lady, which is just not in Merida’s repertoire. Having a 12-year old daughter of my own I can totally relate to the queen and all of the eye rolling and sighing she is the recipient of by young Merida.

There are plenty of laughs in the film. Merida’s triplet brothers are the comic relief as they wreak havoc throughout the castle. And it is not without some crude humor that includes mooning and a few naked hineys.

I liked it and would recommend it but it was not my favorite Pixar flick. I might be biased against the whole humans turning into bear genre, I wasn’t a huge fan of Brother Bear either. Amelia’s final review was she liked it and wanted to see it again because it was exciting. However, she did cry towards the end because she was so upset that the mother was a bear. She didn’t believe she would turn back into a person and that made her sad. Through her tears she said, “Now she is going to have to live a normal bear life.”

Definitely worth a trip to the theatre especially now that school is out and we will all be looking to keep the kids occupied. 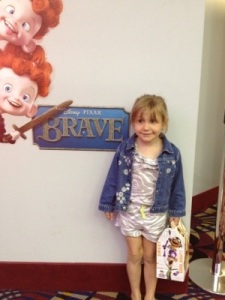 Amelia gives Brave a good review. She says she will definitely see it again!