You Have Been Ghosted 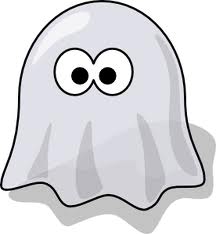 You have been ghosted!

At night children of all ages are running throughout my neighborhood after dark, sneaking up to front doors, leaving behind bags, ringing bells, and then running away.

When I was little we called this ringing and running, which was not acceptable at all. However, add a bag full of candy and a cute sign and now we have a completely acceptable custom.

As soon as the leaves start to change my children anxiously await for October so they can start ghosting there friends. It has become quite a tradition in our family. Weekend nights friends are invited over and the ghosting begins.

The rules for ghosting are simple. You can only ghost houses if the family is home and if that haven’t yet been ghosted. Leave a bag of candy at the door along with a sign for the family to hang on the door so others will know they have been ghosted. And most important rule- don’t get caught!

Over the years ghosting has become so popular. Everyone seems to get ghosted multiple times regardless of the signs on the door. Also, not getting caught is becoming more of a challenge. My own daughter takes off like a bat out of hell when she hears the knock on the door. She has successfully caught several ghosters over the years chasing them down the block.

My girls went out with some of their friends, their father and his friend last Saturday night. They made copies of their sign, loaded up the treat bags and created lists with many potential targets. After being directed to shorten their lists they reluctantly crossed off  names and brought the amount down to a respectable number. Dressed all in black with their hoodies up, prepared to be as sneaky as possible they set out.

My fourth grader and her friend did a pretty good job of not getting caught. They were pretty serious ghosters. The 12 year olds put in a good effort but I believe they were caught multiple times. I don’t know if you have ever been anywhere with several twelve year old girls but there is a lot of shrieking. I don’t believe their mission was too covert.

This entry was posted in Community, Family, Pre-teen, tween and tagged Ghost, ghosting, Halloween, halloween activity, Halloween treat bag, holidays, ring and run, you have been ghosted. Bookmark the permalink.

7 Responses to You Have Been Ghosted