Posted on December 4, 2014 by mommydaybyday

We knew he was coming.

He told us he would.

The Elf on the Shelf

You can check him out daily on your facebook, twiiter and instagram feeds. The Elf on the Shelf is back to delight the hearts’ of little ones everywhere and aggravate parents to no end.

It’s December and he is back and in full force at everyone else’s house. He hadn’t returned to our house and this left my littlest one wondering…

“Why hasn’t he come back from the North Pole?”

“My friend Emily has a girl Elf on the shelf too, can I get one?”

Problem 1: Where the heck is? What ingenious place is that d#**m Elf hiding?

This Elf was starting to make me mad. He better show up and show up quickly. How many of us spent the first few days of December tearing the house apart to find his magical hiding place.

Maybe he goes to Florida in his off-season?

Apparently my Elf has an alcohol problem because I found him hiding in the liquor cabinet. I guess he has a little Captain in him.

Of course he was only found after I had completely given up all hopes of finding him. In my desperation I had gone ahead contacted the North Pole and put in an order for a Girl Elf on the Shelf. Figures! 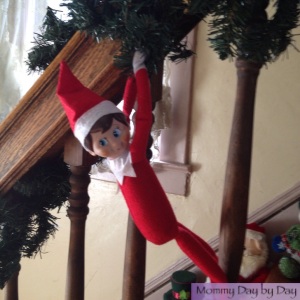 Now that he has reappeared I am faced with the daily issue of making sure the Elf remembers to use his magic to move everyday. Like my Tooth Fairy my Elf on the Shelf sometimes is a slacker.

job, be sure to check out Pinterest. A place where moms can go to feel completely unworthy and unimaginative. You can check out all of the fabulous and super creative ways Elves have appeared at other people’s houses.

Of course in the end the joy my daughter has every morning when she jumps out of bed to find her elf is totally priceless. I know, I know, so cliché but completely true.

And now, lucky for our Elf on the Shelf, he has a girlfriend. We are all happy… at least until tonight when the madness starts all over again. 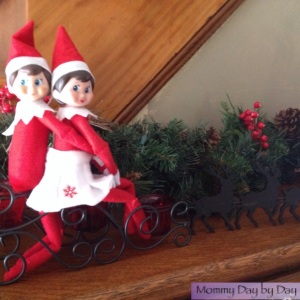